The Advanced Materials for CArdiac REgeneration (AMCARE) project is a consortium of academic and industrial partners, which has received funding from the 7th European Union (EU) Framework Programme to develop regenerative therapeutics for the treatment of myocardial infarction (MI). The project began in November 2013 and is tasked with the advancement of novel and transformative therapeutic strategies to address the significant healthcare burden posed by myocardial infarction.

What is Myocardial Infarction (MI)?

What is Myocardial Infarction (MI)?

A healthy heart with free-flowing cardiac vessels, which supply the heart muscle with blood, is shown on the left. On the right a blockage has formed in a coronary artery (inset) which has deprived a large area of the heart muscle of blood. This has caused the formation of a scar, which is depicted as an area of discolouration in the heart muscle.

Myocardial Infarction (MI), more commonly known as a heart attack, occurs when a blood vessel feeding part of the heart muscle becomes blocked, depriving the muscle of blood, a condition known as ischemia. This can happen due to a build-up of fatty deposits, known as atherosclerotic plaque and/or the formation of a blood clot. The ischemic muscle is deprived of oxygen and nutrients and consequently cells in the blood-deprived area (called the infarct) begin to die. As cells die, the ability of the affected muscle to beat and pump blood around the body is compromised. This can result in death if the affected area is large enough, or if medical assistance is not available or delayed. In many cases, the affected artery can be unblocked by a medical intervention, resulting in blood being allowed to flow back into the infarct region, and helping to improve the chances of survival. However, cardiac muscle cells begin to die very quickly during a myocardial infarction, often before medical staff can restore blood flow, resulting in lasting damage and impairment in heart function. Frequently, surviving patients are left with a large scar in the heart muscle which has no ability to contribute to the pumping action of the heart.

Figure 1.- The mechanism of a Myocardial Infarct. A healthy heart with free-flowing cardiac vessels, which supply the heart muscle with blood, is shown on the left. On the right a blockage has formed in a coronary artery (inset) which has deprived a large area of the heart muscle of blood. This has caused the formation of a scar, which is depicted as an area of discolouration in the heart muscle.

What is Congestive Heart Failure (CHF)?

What is Congestive Heart Failure (CHF)?

After an infarct has occurred the heart can change, resulting in a condition known as congestive heart failure (CHF). The heart becomes enlarged, in an attempt to compensate for the damage which has occurred within the muscle wall. The inner chambers of the heart become dilated, resulting in the heart walls becoming thinner and less efficient at contracting. Ultimately, the heart becomes less and less efficient at pumping blood until it is unable to pump enough blood to meet the basic demands of the body. CHF patients often have a difficult time performing everyday activities, such as climbing the stairs. Current therapies for the treatment of MI and CHF include treatment with drugs, surgical procedures such as ventricular resection, coronary artery bypass or mechanical aids such as left ventricular assist devices. Such approaches serve to treat symptoms or limit disease progression to some degree, but are largely ineffective in the long-term. The only effective treatment for end-stage CHF is heart transplantation, which is limited by a shortage of heart donors and also requires a highly invasive and complex surgical procedure.

MI represents an enormous source of mortality and morbidity globally. Diseases of the coronary arteries such as MI and CHF are the main cause of death in developed countries. According to the European Society of Cardiology (ESC) one in six men and one in seven women in Europe will die from MI. The American Heart Association (AHA) reports that 635,000 Americans have a myocardial infarction each year and that heart failure caused 275,000 deaths in the United States in 2009.

There is a clear need for more effective therapies for MI patients, to prevent progression to CHF and enhance quality of life. One approach which has demonstrated significant potential is treatment with stem cells or with proteins naturally produced within the body, known as growth factors. These therapeutics have shown some potential to enable the regeneration of damaged myocardium and partially restore heart function, when tested in clinical trials, and have largely been shown to be safe. However, the therapeutic effects have been modest or variable when applied to large groups of patients in clinical trials, and consequently such research has not yet resulted in an available treatment for all MI patients.

There are a variety of potential reasons for the failure of regenerative therapeutics to translate to the clinic to date. The majority of clinical trials have utilised very simple methods to deliver such therapies, such as injection into a vein in the arm, resulting in only a small percentage of the administered cell dose reaching the heart. Another commonly utilised delivery method is direct injection into the heart muscle itself, but in a simple salt solution. This does little to help delivered growth factors to stay in the heart or permit injected cells to be retained and survive for long periods. The infarcted heart is a challenging tissue to treat – injected therapeutics are often flushed away or pushed out by the constant beating of the heart. In addition, the infarct produces an inflammatory response and a lack of nutrients and oxygen near the infarct scar makes it difficult for injected stem cells to survive.

The AMCARE project proposes therapeutic strategies which aim to circumvent some of the limitations of commonly utilised treatments, with a view to maximising the effectiveness of regenerative therapies so that they can be utilised by MI patients in the clinic. Our rationale is to use biomaterials to deliver cells or growth factors to the heart. Biomaterials are materials in which cells can be encapsulated or attached, can support delivered cell growth and which are tolerated by the body. In this way, delivered therapeutics will be retained within the heart tissue for extended periods. In addition, biomaterials will provide a protective environment for delivered stem cells and enhance stem cell survival in the harsh conditions of the infarct. By combining regenerative stem cells and growth factors within the same biomaterial, the consortium aims to capitalise on synergistic effects between both therapeutics to maximise regeneration in the heart. The AMCARE project will investigate two major biomaterial delivery approaches – epicardial patches and injectable hydrogels. Epicardial patches are fibrous sheets which can be attached to the outside surface of the heart, known as the epicardium. From there cells or growth factors in the patch can migrate into the underlying tissue to produce therapeutic effects. Injectable hydrogels are viscous gels which can be injected into the heart wall. Often such gels can undergo a chemical change once in the heart tissue, whereby they become more solid, helping to retain encapsulated cells and growth factors. Both epicardial patches and injectable hydrogels provide a protective and retentive environment for cells and facilitate a slow release of growth factors, so that therapeutic effects can be produced for a long time.

Our goal is to deliver our biomaterial therapies in a minimally invasive way, using custom medical devices to access the heart while minimising patient morbidity. Transarterial catheters are medical devices which generally consist of flexible, hollow tubing with an ‘active’ tip, which can perform a task such as administer an injection. The device can be passed into the blood vessels through a small incision, typically in the groin, advanced and manipulated by a surgeon by a handle, until the tip reaches the heart wall. Such an approach is much less invasive than traditional open heart surgery. Currently, such catheters have been utilised to perform injections of cells in salt solutions into the heart wall. The AMCARE project aims to design new catheters which can inject viscous hydrogels into the heart wall, from the inside of the heart chamber. Epicardial patches are placed on the outside of the heart. This project will design a new medical device which can deploy and attach a patch to the heart surface, in a minimally invasive way through a small incision between two ribs, without the need for open heart surgery. 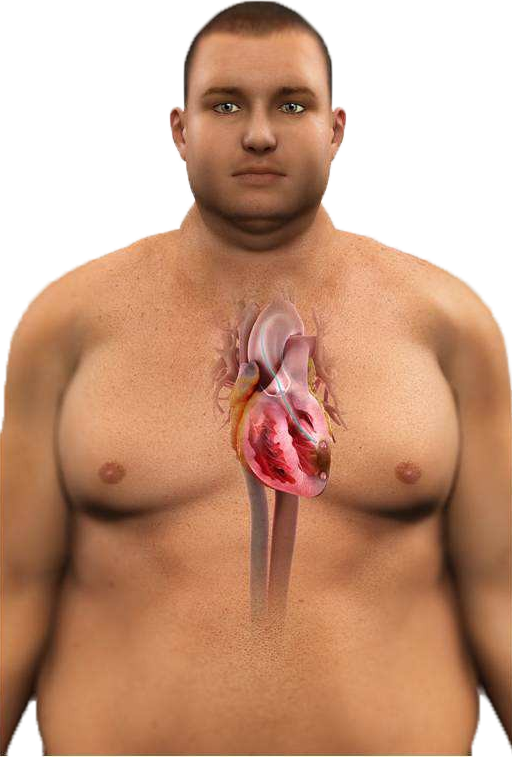 Figure 2.- Patient undergoes hydrogel injection procedure. A patient who has suffered a myocardial infarct undergoes a hydrogel injection from the inner surface of the heart chamber. The catheter device (blue) can be seen entering the heart through a blood vessel. The infarcted region appears as dark and discolored. Two small gel beads have been injected at the edges of the infarct.

The attached patches or injected gels will contain a combination of regenerative stem cells and growth factors. Release of growth factor from the biomaterial into the surrounding tissue will be tightly controlled though the use of nanoparticles. Nanoparticles are small particles, which degrade and release encapsulated drugs or growth factors at a predetermined rate. In this way it is possible to fine tune release to maximise therapeutic effects over long periods. 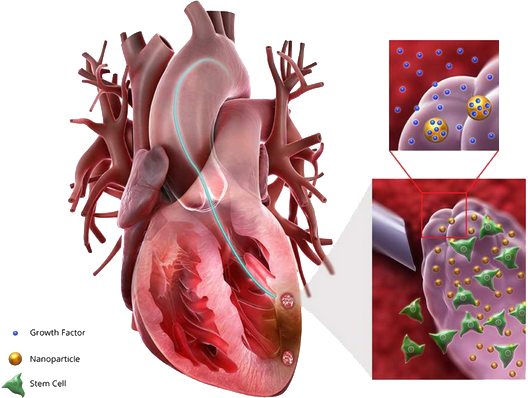 Figure 3.- Gel injection into infarcted heart. An infarcted heart undergoes a hydrogel injection from the inner surface of the heart chamber. The catheter device (blue) can be seen entering the heart through a blood vessel. The infarcted region appears as dark and discoloured. Two small gel beads have been injected at the edges of the infarct. The injected gel contains a combination of regenerative stem cells and nanoparticles containing growth factor. The stem cells are able to migrate out of the gel to help regenerate the infarcted tissue (inset). Nanoparticles release growth factor slowly, to maximise the therapeutic effect over a long period (inset).


Overall, the AMCARE project proposes therapeutic strategies aimed to circumvent some of the limitations of commonly utilised treatments, with a view to maximising the effectiveness of breakthrough regenerative therapies so that they can be utilised by MI patients in hospital settings with invaluable benefits to European stakeholders and society.
More Info About